Roku, Inc. is the leading TV streaming platform in the U.S. by hours streamed. Roku is a pioneer when it comes to the streaming space and has earned the position as the leading streaming service by delivering content over the internet otherwise known as OTT (Over-The-Top). We continue to have conviction in Roku. It has been one of our core holdings in our Mid-Cap Growth strategy over the years and we still believe it has a large runway in front of it. It has been one of our most successful holdings and with good reason, their business is strong and the future looks bright. The Roku operating system is at the core of everyone's favorite streaming providers like Netflix, Hulu, and Disney +. Their operating system has allowed them to partner with leading TV providers as well as their own streaming devices which has fueled the shift away from linear television to streaming.

There’s no question that linear television has taken a back seat to streaming. The time spent watching traditional TV has continued to fall off a cliff. The convenience of streaming and on-demand content is creating a more compelling offering compared to traditional cable. We believe that this trend will only continue into the future as more and more younger generations simply won’t pay for traditional television and won’t switch back.  There will continue to be more options when it comes to streaming across platforms and content will continue to migrate here. Since 2019, 1 in 3 smart TVs sold in the U.S has been a ROKU television.  When it comes to who’s positioned best for this continued shift we believe Roku is by far the leader in terms of technology and market share. 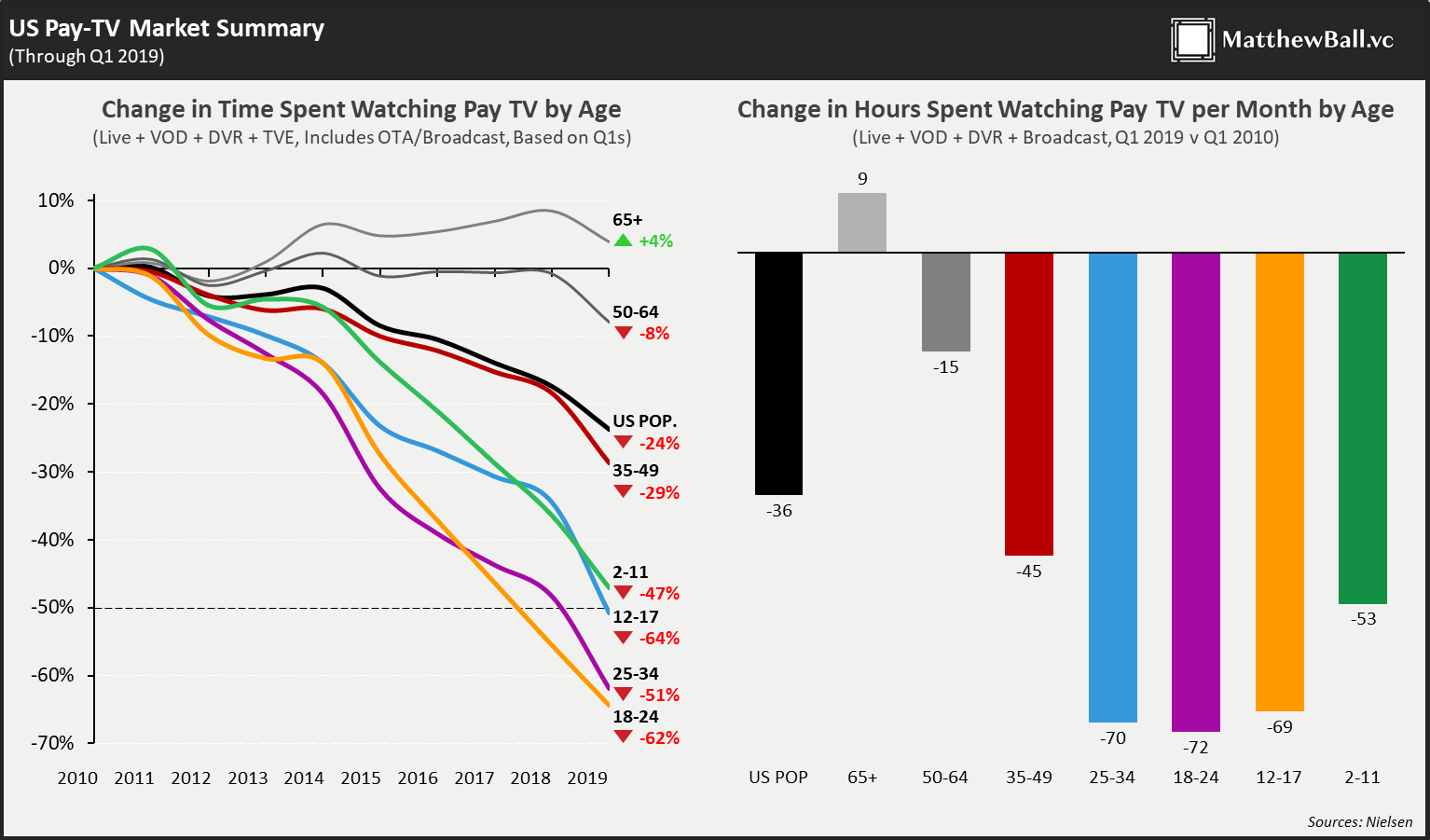 In the tech world, they call the fierce competition around streaming the “Streaming Wars”. Since Netflix took off with massive success there have been many new entrants into the space. Everyone wants a piece of the action as we’ve seen most recently with the launch of Disney +. This streaming battle has only been accelerated by COVID-19 and stay-at-home lockdowns. 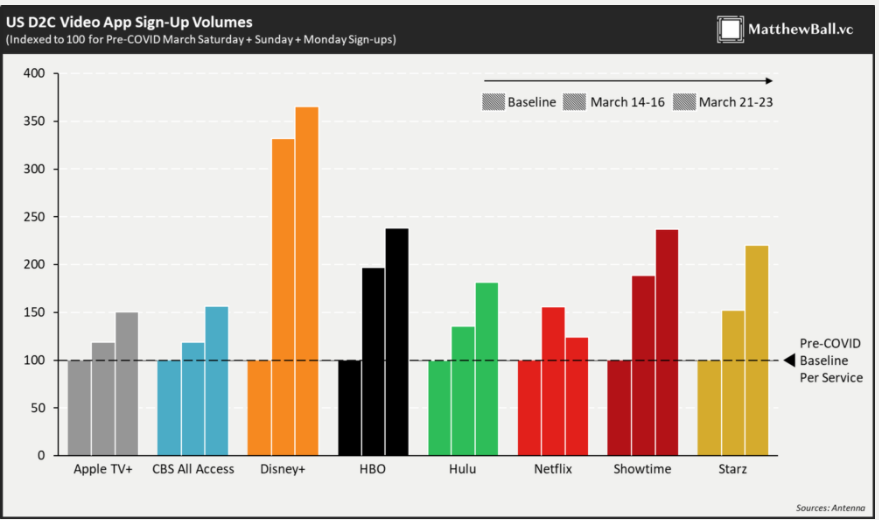 Sitting in the middle at this competition for eyeballs is Roku. The underlying technology that allows all of these streaming services to operate. While they battle for market share of attention by launching new content, Roku is an agnostic player benefitting from the competition within the streaming wars.

After the recent protests against traditional advertisers like Google and Facebook, many have shifted away from those platforms and looked for alternatives. We’ve seen evidence of this with other social media platforms that benefitted from the rotation (Snapchat, Pinterest). We believe this is another catalyst that can benefit Roku as this is another lever of their business model. They have direct relationships with advertisers and by using their ad platform users can target their ads more specifically. They can then both measure the effectiveness of the ads served and their return on investment. We've also seen traditional TV advertisers start to transition to this as it has a much better return on investment by being targeted instead of the spray and pray method of traditional TV ads. 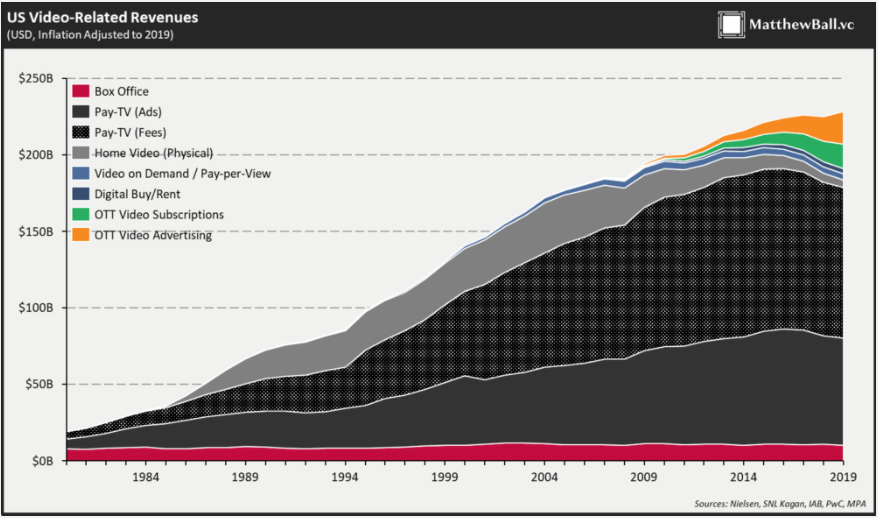 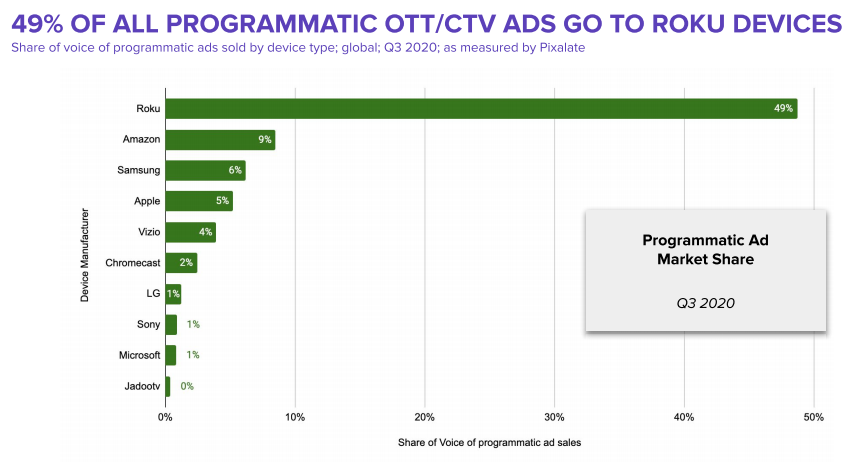 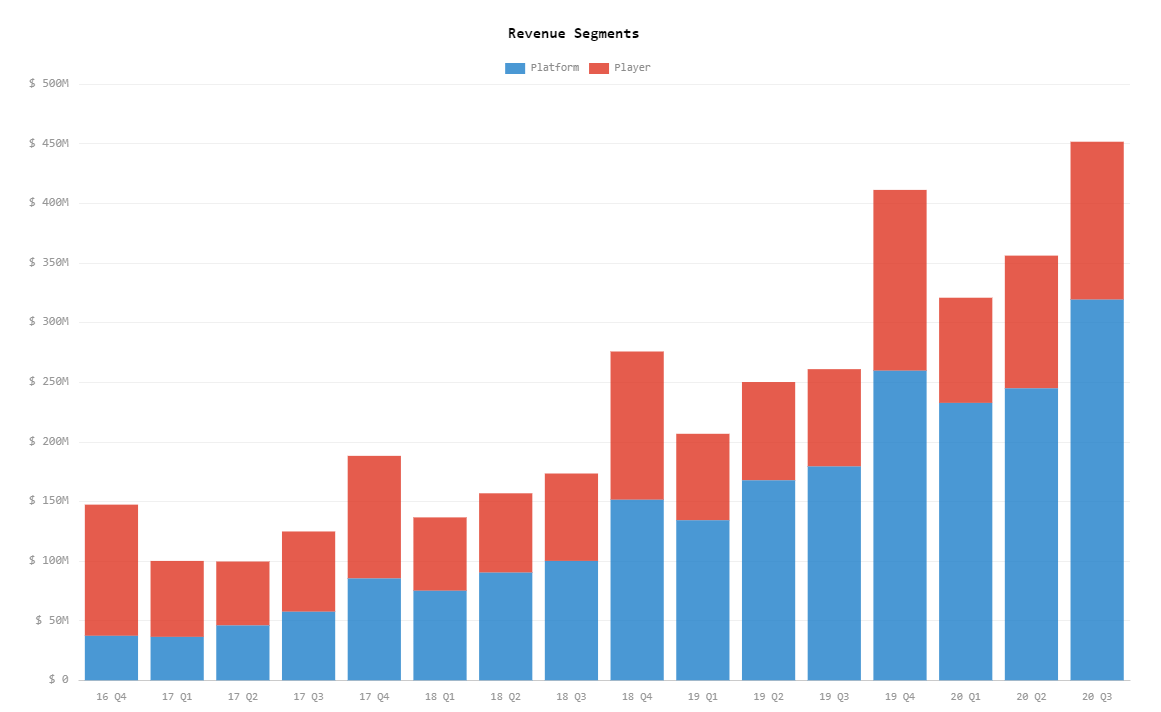 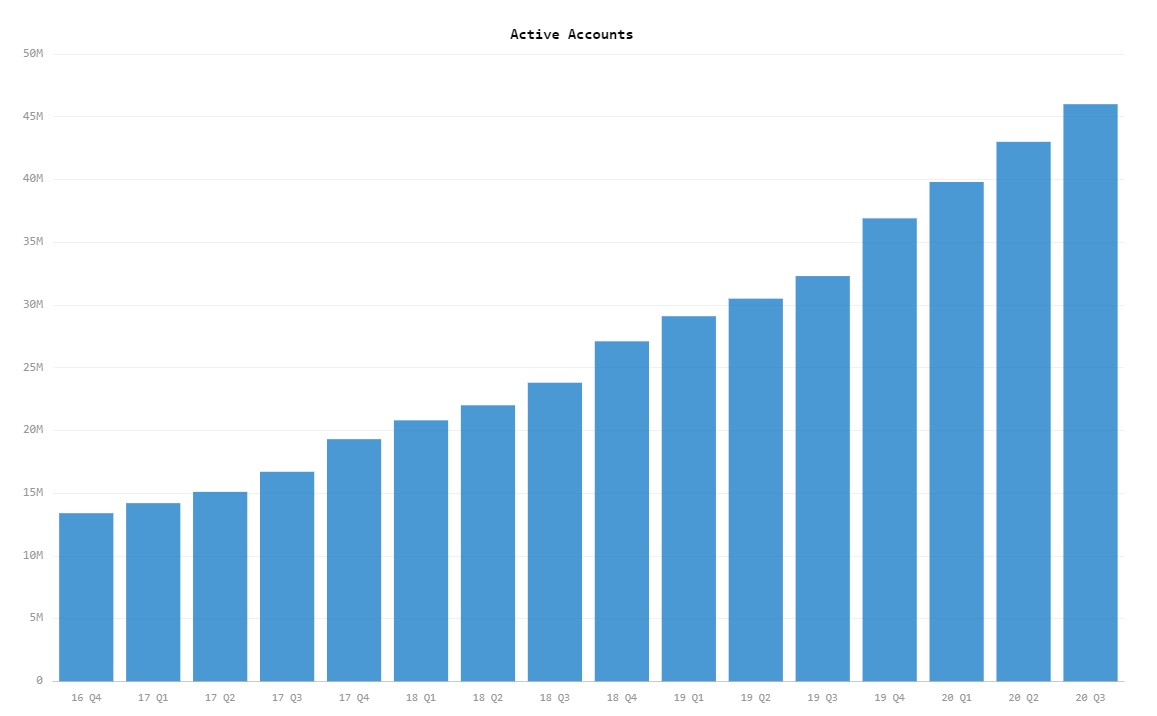 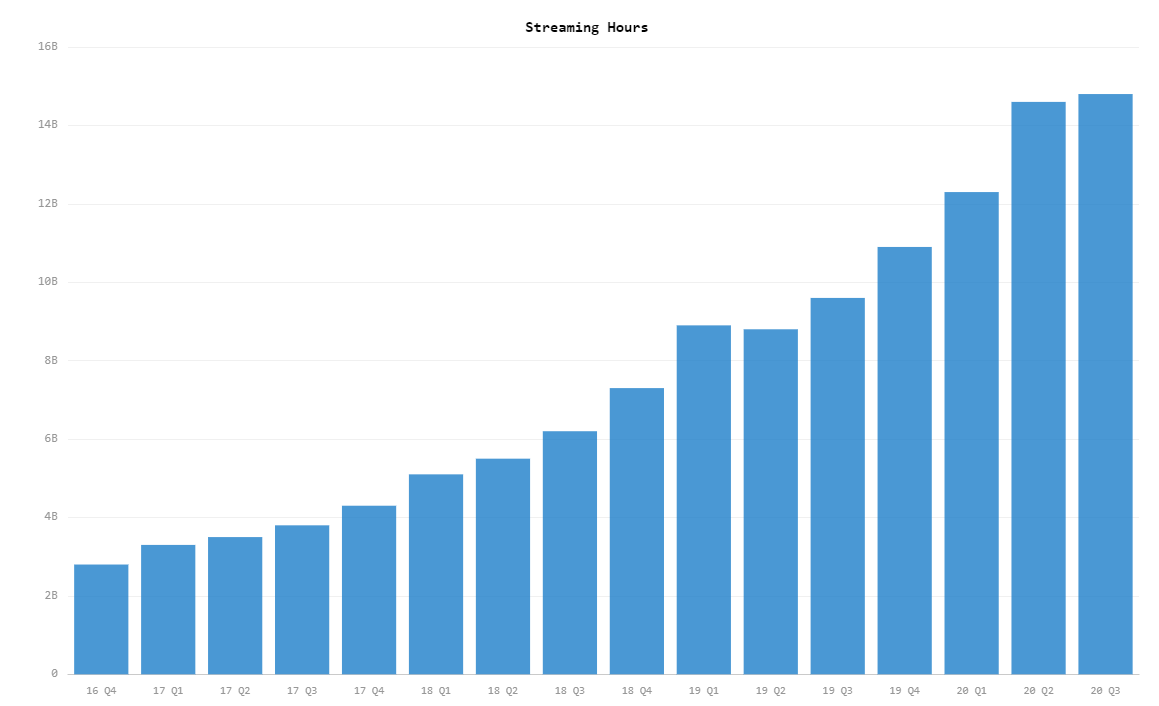 "The Roku Channel reached U.S. households with an estimated 54 million people and grew streaming hours faster than any other top 10 channel on the Roku platform on a year-over-year growth basis."

"The Roku Channel grew more than twice as fast as the Roku platform overall, on both streaming hours and active account reach basis."

"Reached a mutually beneficial agreement with NBC Universal to distribute Peacock that includes collaboration around marketing, advertising, and content for The Roku Channel."

"Q4 year-over-year revenue growth will likely be in the mid-40% range, similar to the growth rate in the last few holiday seasons, and we expect platform revenue to account for roughly two-thirds of total revenue."

Q -  “Investors are looking at companies, post what looks like a very promising vaccine. And hopefully, you'll return to normalcy. Would you expect that to have any major impact on your business?

A - “I don't think that when the COVID crisis subsides, that it's going to change anything because we do believe that long-term trend is still intact (migration to streaming) our research suggests that they're very happy once they move up to streaming. So they're not going back to the old world and paying more for a cable bundle, regardless of whether we're out of the woods on COVID or not.

Q -  “Do you think that there is evidence that there really wasn't an inflection in just TV ad budgets migrating online too?”

A - “We have seen them mix shift into OTT and into Roku in particular because that's where the viewership is going. But it's also a more targeted, more measurable piece of advertising. And now that there's more scrutiny on budgets, having a much better sense of the ROI of your marketing is very, very appealing to marketers.”

Q - “So how do you view the opportunity with a Roku channel in terms of engagement and in terms of monetization?”

A - “If you're a standalone AVOD (Ad-Based Video On Demand App), you don't know who's watching, a lot of people don't realize that. But we know who's watching on the Roku channel. And so because we know who is watching and we have good data, we can have better content recommendation algorithms, hence that drives engagement. And just as importantly, on the monetization side, we can now sell that for a premium targeted CPM (CPM (cost per mille) is a paid advertising option where companies pay  a premium for impressions an ad receives.)

While Roku doesn’t have a lot of competition right now, in the future there could be some new players entering the game as streaming becomes mainstream. Amazon has tried with their firestick and hasn’t been that successful but as we move into this era of social commerce and streaming there will be more competitors that arise in the race to capture attention. There are really two devices that capture most of our attention. The TV and the smartphone. A lot of social media companies have already scaled and been successful with monetizing smartphone users with apps so a transition into TV would make sense. Comcast has just recently started talks with Walmart to try and manufacture their own TV with their own operating system. Traditional cable networks know that they are losing in this streaming war. So whether it's the traditional cable networks or a social media company more competition is likely on the horizon.

Being an agnostic player in the streaming wars is great if there continues to be great content being put out. If there starts to become a lack of engaging content, that will translate into consumers spending less time on their devices. This could cause Roku to suffer. There’s been some pushback of production on content due to COVID so Roku is somewhat at the mercy of the content creators when it comes to overall attention and streaming hours. They do have the Roku channel which is gaining traction, but their main driver is the major content publishers.

Like a lot of growth companies, Roku's stock price is expensive. Trading at 20.5x last 12-month revenue they’re not cheap when you compare them to some of the content providers like Netflix and Disney.  While they’ve improved their operating margins they’ve yet to consistently generate good earnings. While the price may be steep we believe paying up is worth it. With their capture of market share and secular tailwinds, we believe they can continue to execute on the revenue side to justify this valuation. 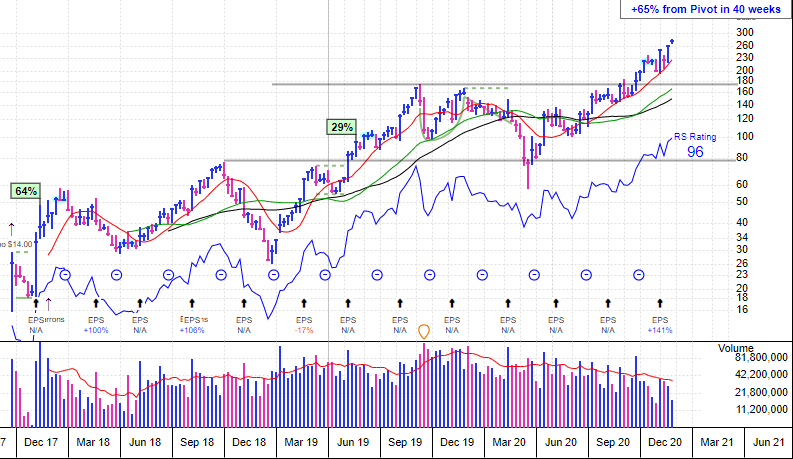 Since the IPO, ROKU has experienced lots of volatility. Most of these volatile moves have been contained within support and resistance levels. Building large bases overtime then breaking out of those bases leading to a thrust of upwards momentum. You can see at the end of September we once again broke out of a large base. Once price pushed through the $180 level momentum took over leading to an appreciation of over 50%. The last breakout of $80 led to a gain of over 125% before pulling back. While we're currently overextended on daily time frames, we're still in a strong uptrend and will likely be buying pullbacks above $180 and the fundamentals are still intact.

Roku has consistently proved that they can scale their business through multiple avenues. While they may have some competition on the horizon their market share is large and their platform is sticky. The underlying operating system gives them a huge competitive advantage among other ad tech companies competing for eyeballs. The trend of ditching traditional cable is in its early stages still and we’ve seen evidence that it is only accelerating amongst the younger generations. With its proprietary technology and network effects within the platform, they are likely to continue to gain market share from traditional advertisers as marketers seek other targeted outlets with better ROI’s. Their agnostic position among the streaming war content providers allows them to benefit from the competition and further monetize their users as streaming hours increase. We believe Roku is in the best position to take advantage of these secular shifts and will continue to be an industry leader for years to come.

J2 Capital may discuss and display, charts, graphs, formulas which are not intended to be used by themselves to determine which securities to buy or sell, or when to buy or sell them. Such charts and graphs offer limited information and should not be used on their own to make investment decisions.