In most communication Illinois teachers receive from TRS – my household included, as my wife is a teacher – it’s always upbeat:

We have enough money….

It’s on the state to fix things, not us. It will happen….

All payments are being made on time….

While this is encouraging to hear, the facts are starting to say something different. It shouldn’t be surprising - Illinois’ pension is one of the worst funded in the country, so it was only a matter of time before problems started to become more obvious.

As I’ve been reviewing the latest reports and newsletters being released from TRS, there is a pattern of behavior that is being shown that shows even TRS is getting nervous of where things might be heading.

As of June 2019, the TRS pension fund currently invests $53,000,000,000 ($53 billion) in its pension fund. This fund is made up of contributions from previous and current employees, school districts and state contributions. This money is then given to various investment managers to professionally invest and, over the long term, grow a portfolio. However, when looking over the fund managers who manage the money, it becomes clear that one investment philosophy is subscribed to – active investment management. From looking at over 100 companies who invest the pension’s money, only a handful subscribe to a “passive” investment philosophy. A passive strategy means they trust the market and invest for the long-term. They don’t jump in and out of positions, time the market, or change their allocation based on current trends. With so many managers in the pension fund taking an active approach – and with so many companies taking different approaches – it seems that TRS is trying to hedge bets, or investment risk in this case, in so many different directions.

So much research shows this approach doesn’t work. Passive investment management beats active management over the long-term. Active management performs better during volatile markets as these funds can jump out of declining markets, but it doesn’t get better returns when you step back and review investment performance over decades – like it should be done.

So why is TRS doing this? Why is so much of the investments being given to managers who jump in and out of the market? Or who liquidate positions to cash when they get nervous? Or who hire so many people to do research, to buy using a “strategic” approach in the attempt to make an extra buck.

Because it does just that: it passes the buck. In my opinion, TRS has now passed the buck to active investment managers to get better rates of return. Despite research showing this doesn’t provide a better result, it removes blame from them. Instead of relying on the stock market to do its job and provide adequate rates of return over a long period of time, TRS is looking at short-term performance through active management and making decisions based on this.

This brings me to the second hint that all is not well at TRS. From reviewing their February 2020 Investment Committee meeting notes, there are lots of fund manager changes but with insignificant dollar amounts. For me, this is a sign of nervousness and a lack of long-term strategy.

This section from the report highlights some of the manager changes being made. Northern Trust is being given $500 million of the fund to manage, while AQR has had $217 million taken away from them. This is a lot of money! But it’s actually not when you look at the size of the pension: $53 billion.

Giving Northern Trust $500 million may seem like a lot of money, but it’s less than 1% of the fund; $217 million is 0.5% of the pension fund. There are pages of changes like this and they happen multiple times throughout the year.

Let me give you an example of what this means in a real-life example:

Joe Sample invests $100,000 in his IRA. Every three months, he examines new investments and decides to move various amounts of money around. In March, he sold $1,000 of ABC stock and bought XYZ stock. ABC and XYZ are both US Large Cap investments. He then sold $500 of Green fund and bought $500 of Blue fund, which both investment in Chinese companies. He then decided that after researching Red fund for the last three months, he was comfortable investing $225 and made the trade.

Can you see how inconsequential all these trades are? They are so tiny that they will barely impact his overall rate of return. And some of them are switches from one fund to another – AND THE STRATEGY DOESN’T EVEN CHANGE! It’s one US fund to another.

So why are these changes being made? There may be a number of reasons, but given they are inconsequential in size, makes me think they are made so it looks like pension fund is doing its job. The pension pays investment consultants to suggest changes, and if they came back with, “Let’s just invest $200 billion in an S&P 500 index fund…”, they wouldn’t be earning the money being paid to them.

“But Dave, active management has worked during down markets in saving the pension money….”

Based on an email to TRS members in April 2020 (screenshot below), TRS stated that the fund started off the year at $54billion and had only declined to $50 billion. While potentially true – no reports were released to back this up – this represents a 7.5% decline in investments. A portfolio like TRS’ (50% equity, 50% other and fixed income) would have declined by approximately 13.5%. This is great to hear that the losses weren’t as severe as a typical portfolio.

But at what costs was this loss prevented?

Notably, there are two costs:

In addressing #1, we have to understand what costs TRS are paying for their investment managers. Typically, a passive index fund cost between 0.02-0.5%. An active fund – which comes with a manager(s) to run it – costs 0.5%-2.0%. If it is a private equity fund, of which TRS uses many, they usually go by the cost structure of “2 and 20”. This means that you pay them 2% to manage your money and any profits they make that year, they keep 20% of them.

With #2, while it is great that TRS fund managers stopped the bleeding of losses from their funds by selling positions, when they do they get back into the market? Research has shown, that even missing the best 10 days of performance over a period of time can stunt a portfolio’s performance numbers. Sadly, these best days of performance often come immediately after a sharp downturn, which is when many active managers are selling positions to stop losses.

TRS is taking a risk by going almost all-in on an active performance strategy when it’s been proven not to provide better returns in the long-run.

When the newsletter came through that TRS only lost $4 billion through the first part of 2020, I shook my head because it only tells one part of the story. I only hope that the second part is better than history has shown. 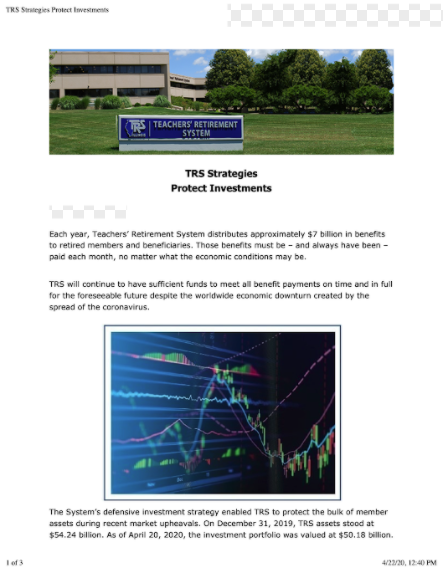 Since 2018, TRS has offered two pension refunds – the AAI refund and the APB refund. The AAI refund is an advanced payment of the Cost of Living Adjustment on a standard pension and the APB is a discounted lump-sum pension payment for inactive members.

TRS secured $1 billion in funds to start paying these refunds, with $300 million secured in cash and the other $700 million being promised in the future should it be needed.

Oh boy, is it needed.

From a May 13th, 2020 email to TRS members (screenshot below of partial content), the demand for buyouts has been higher than expected. This gives you a clue as to how confident soon-to-be-retired members are of the pension system. Not wanting to leave the fate of 100% of their pension to the state of Illinois, they are taking partial refunds and investing the difference themselves.

From soon-to-be-retiring teachers I work with in developing comprehensive plans, many of them have decided to take these refunds. From analyzing their situation from many angles, but also looking at how much risk the pension system is under by being 40% funded, many clients feel it is prudent on their behalf to receive some of their promised benefits early. While at a discount (meaning they don’t receive all of their money up front) they would rather than rely on themselves and the stock market than an ill-funded pension plan to provide all the benefits for the rest of their life.

As we are two years into this funding scheme, and with an expiration date four years from now, I foresee the funds running out as almost 25% of it is already gone. While it will alleviate the burden on the pension fund somewhat – but by passed the funding burden to Illinois taxpayers through the issuance of bonds to fund the $1 billion – TRS is still a long way from being a healthy pension plan.

If you made it this far, thank you for reading my analysis. As I work with more and more Illinois teachers in designing their retirement, I find it being my duty to make sure they are educated on all of the things related to the pension plan.

If you’re finding that you need guidance in how to plan for retirement, you can reach out to me here to set up an appointment. Stay well!

When I initially work with clients, my aim is to say as little as possible. I want you to share your story, and I will probe with questions as needed. I want you to feel that you have a safe space to share the experiences you've had in life and with money, whether they are good or bad.