Investors cannot know with certainty what performance stocks and bonds will return next quarter, next year, or even five years from now. Research indicates that market timing does not work.

For example, what was the state of the U.S. economy between 2007 and 2010?  The housing market had collapsed, causing broad economic damage. Large banks Bear Stearns and Lehman Brothers had gone bankrupt the year before. Unemployment was nearing 10%, a high not seen since 1983 (Reference: https://fred.stlouisfed.org/series/UNRATE).

In response, credit markets froze up and equities saw a precipitous decline from 2007 highs. At its lowest point in 2009, the S&P 500 was down close to 70% from its peak.

Some investors, during that volatile period, chose to attempt to time the market. Divesting from equities and going to all cash with the expectation that stocks would decline further.

Below is a chart showing the performance of equities pre- and post-financial crisis (see 2007-2012). 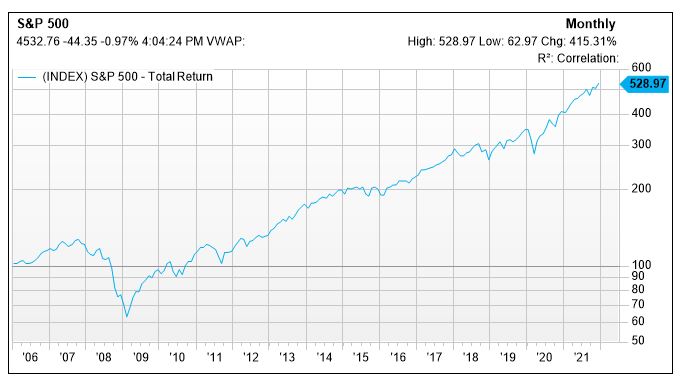 The market provides no “buy” or “sell” signal. However, commentators tout the attractiveness of the market in 2007, and, shortly after a reversal of price, make dire proclamations at 2009 lows. Just when it was assured in 2008 that exposure to the market was unattractive – that there certainly were more lows on the horizon – the S&P 500 retraced its performance and was nearly back to 2007 levels by 2012.

Walt Disney Co. dropped from $123 in May  2008 to nearly $55 in March  2009. Did Disney sell the Walt Disney World theme park? Did they stop producing beloved movies like Pinocchio and Lion King? Traffic at parks was sure to be impacted by broad economic uncertainty, but did half the business disappear over 10 months as depicted in their stock price? No, Disney was the same company before and after the crisis. These volatile periods are opportunities for investors to take advantage of price deviations and buy good companies like Disney.

At FAI, we take as given that market timing is impossible; and our portfolios are positioned accordingly: we maintain a long-term oriented portfolio of diverse securities. In response to volatility, FAI takes advantage of the frequent deviations of price from fair value; investment decisions are actively made with business fundamentals and a long-term horizon in mind. We invest across industries in our equity portfolio, and we diversify across asset classes. With the knowledge that timing any particular security or asset class over a limited time frame isn’t possible, portfolios are constructed so as to reduce volatility relative to the S&P while maintaining an attractive return.

What can we take away from this discussion? The proper course of action is to focus on your own personal investment goals over that of the market’s prevailing price. Prioritization of what investment hurdles and cash flow needs must be reached is what matters. Whether the S&P 500 is up or down today shouldn’t impact your mood or your financial plan. FAI monitors the constant market volatility and will address your financial concerns.

Stability through every season of life.

Get more personal finance tips with Monthly Insights delivered directly to your inbox.